Ready to love your email again?

We’re offering an exclusive discount for Tim Ferriss Show listeners and newsletter subscribers. If you’re new to HEY, sign up before December 31, 2022, and get $20 off your first year.

To redeem this offer, just email us from your brand new HEY account and we’ll get you set up.

Start a free 14-day trial
no obligation, no CC required

Want to take a tour first?

See the features that’ll be included with your new account.

We didn’t reinvent the wheel, only email.

Email as you know it is out the door. Email as you want it just arrived. HEY’s totally familiar, but completely different.

Got 37 minutes? Really curious? Here’s a full product walkthrough from our CEO

Your own @hey.com email address

Sign up for HEY, and you’ll get your own @hey.com email address. Fresh starts are rare in life, and a pristine, unspoiled email address is even rarer. So state your name, pick your email, plant your flag, and stake your claim.

It all starts with a Yes or No

When someone emails your @hey.com address for the very first time, they don’t get straight through, they land in The Screener. This is where you decide if you want to hear from them or not. Yes and they’re in, No and you’ll never hear from them again. It’s consent-based email, where you’re in control.

Putting email in its place

If you say “Yes” and screen someone in, their email lands in one of three places: important email you want to read immediately goes to The Imbox, non-urgent email like newsletters that you read occasionally go to The Feed, and things like receipts that you rarely need to read go to The Paper Trail. And it’s all up to you — you tell HEY where you want someone’s email to go.

The Imbox is for your important email

When you say “Yes” to someone in The Screener, their email lands in the Imbox by default. It’s the place for emails you actually want to read, from people and services you absolutely want to hear from.

The Feed is for your casual, whenever reads

The Feed turns your newsletters, promotional emails, and long-reads into a browsable, casual newsfeed. Just scroll, everything’s open already. See something you like? Click it and read the whole thing right in place.

The Paper Trail is where your transactions go

HEY’s Paper Trail keeps the transactional email clutter in one place, out of your face. When you need to refer to a receipt, order confirmation, service notification, etc. just head over to The Paper Trail and it’ll be waiting for you.

‘Reply Later’ is a game changer

You often know you need to get back to someone, but you don’t have time right now. Gmail, Outlook, and the rest, force you to come up with kludgy workarounds to deal with this (like marking an email unread so you hopefully remember to deal with it later). That’s ridiculous.

With HEY, if you know you need to reply to something later, just tap the “Reply Later” button to move the email to a dedicated ‘Reply Later’ stack at the bottom of the screen. It sticks around, but stays out of your way. Queue ‘em up throughout the day.

Then, when you do have the time, click the ‘Focus & Reply’ button. This lines up every email in your Reply Later stack, all open on a single page, one after another, with a reply box next to each one. Now you can knock them all out without being distracted by anything else. It feels like magic, and there’s absolutely nothing else like it.

Surface files, don’t dig for them

If you’re looking for an attachment, why should you have to find an email first? That’s backwards. With HEY, you get an attachment library that gathers up every attachment you’ve ever received in one organized, siftable place.

Email is frustrating because so much is out of your control. Vague subject lines, getting cc’ed to death on group threads, separate threads that should really just be one thread, etc. You quickly get stuck dealing with everyone else’s bad email hygiene. No more! With HEY, you’re in charge.

If someone sends you an email with a non-descript subject line, you can rename it to whatever makes sense for you. You’re in control. 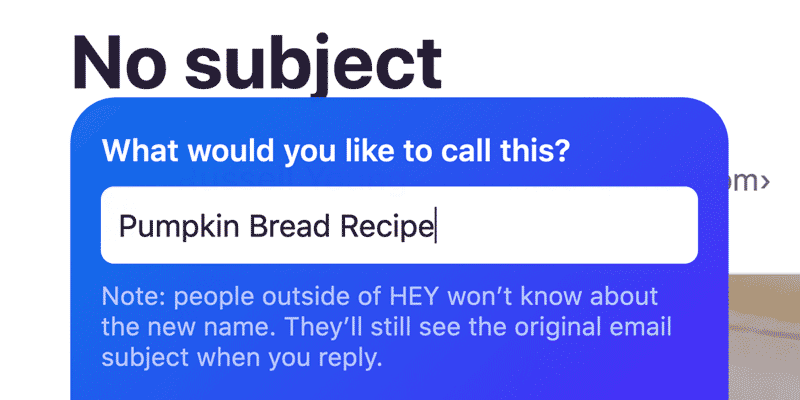 Tired of that group thread? “Ignore” it. You’ll get the emails, but the thread won’t show up as new in your Imbox. You’re in control. 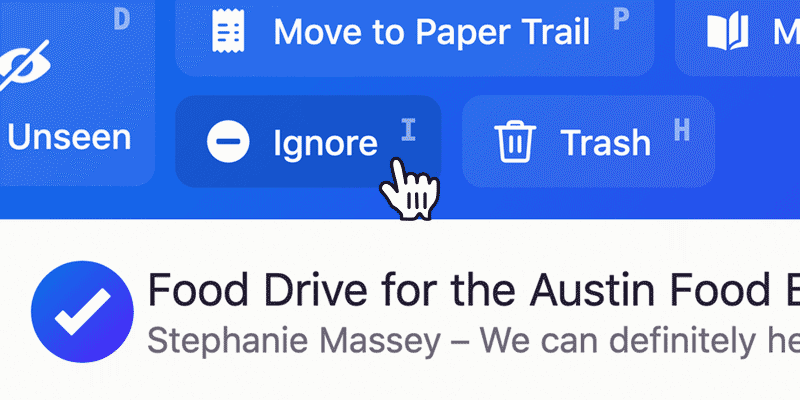 If someone sends you a separate email on the same topic instead of replying to the thread, just merge them together. You’re in control.

Instead of getting push notified for everything, you decide which senders or threads are important enough to warrant notifications. You’re in control. 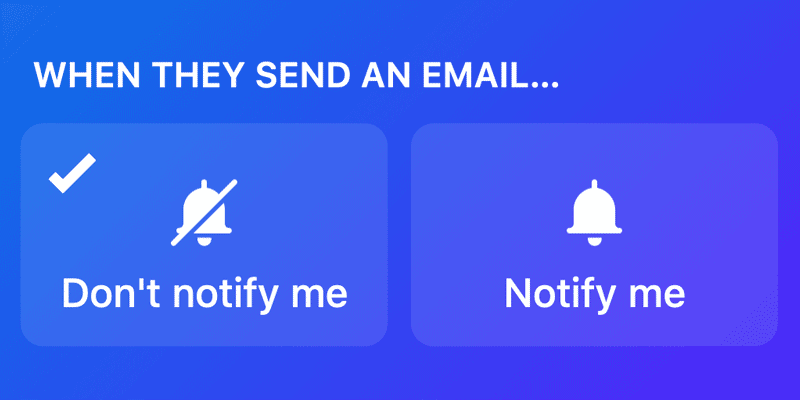 HEY blocks spy trackers so you can read your emails without senders capturing any personal, private data. You’re in control. 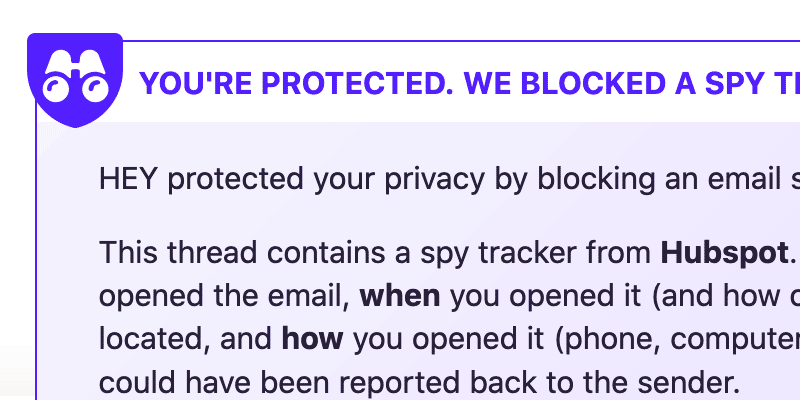 And that’s just the tip of the iceberg. When you put it all together — power over who gets through to you, purpose-built boxes for the different flavors of emails, dedicated workflows, control over the traditionally uncontrollable, and strong privacy protections — it’s like magic. HEY’s a revelation.

Start a free 14-day trial
no obligation, no CC required

Sorry, this website uses features that your browser doesn’t support. Upgrade to a newer version of Firefox, Chrome, Safari, or Edge and you’ll be all set.